It has been a long while since I stepped foot into a yoga studio. My last blog was on April 5th. Damn! Sad shame. I have still been active, but not in the yoga department. I was planning on picking up my passbook, when I got an invite on Facebook from my girl Ashni about an Osho Kundalini Meditation class she was teaching on June 1st, which happened to be the New Moon.

My New Moon ritual for June had already been planed out for a bit. I ended my IndieGoGo Campaign on the New Moon because I knew that although the campaign was just beginning, there was much newness ahead. I also made a spa appointment for that day at the Trump Soho Spa. I had a Turkish Hammam treatment. Amazing! No I’m not rolling in the dough like that. I was on assignment, so my treatment was on the house. Then I saw the meditation invite and thought it would be the perfect ending to the day. Somewhere along the way I picked up a Reiki client for that day as well. So it was full indeed.

The 1st was hot and humid. You didn’t have to walk to far in New York to feel the heat all over you. When I finished with my Reiki client I had to rush to get to meditation.

The class was at a spot called Move with Grace in Clinton Hills, Brooklyn. That was the first neighborhood I lived in when I moved to Brooklyn. Boy has that neighborhood changed, but that’s for another blog. I jumped into my yoga pants and then onto my bike and headed to the studio. I biked from Crown Heights to Clinton Hills. Easy ride down Pacific to Bedford. Down Bedford to Dekalb. Dekalb to Hall St and then left on Myrtle.

I was fully expecting this to be a sitting meditation. That’s what I usually do when I got to meditate at New York Insight in the City, but boy was I in for a surprise. Now Ashni has put some very subtle hints in the email saying what the meditation would be like, but clearly I missed all the hints.

By the time I got there I was drenched with sweat. It was crazy. I thought I would be okay because I was going to sit and meditate right? Wrong!

When I got in I had to sign a liability form, which I thought that was strange if we were going to just be sitting there. HA! When I get in Ashni was talking to two other classmates about what we were about to do. She backtracked for me and told us that we were going to be shaking, dancing, standing and sitting or lying down for 15 minutes each! Folks, that’s a long time. She showed us the shake and then talked a bit about the dance, which was our own and not choreographed. Well there went my idea that I was going to be able to cool down right away.

After the instructions Ashni fired up the music. It sounded like someone on a vibraphone. It was very staccato and it did make you want to shake. Oh did I forget to mention that we are doing all this with our eyes closed? Carrying on...

So on we go shaking for 15 minutes. Probably the longest 15 minutes of my life. I actually got tired after a while. It was wild to do, but there I was doing it with my eyes closed. Finally that music faded down and then there was new music.

This time the music felt like something one could belly dance too. I begin dancing. Remember we all have our eyes closed. So as much as you might want to all-out dance you can’t move around too much as you might bump into your neighbor or better yet a wall! So there I am dancing with my eyes close. Now I’ve been out dancing many times in my life. I’ve seen the inside of my share of clubs. I have danced for hours on end without stopping for water, but this also seemed like one of the longest 15 minutes of my life. Maybe it felt that way because I couldn’t move around so much. I could jump and sway and spin, but I have to admit that the first time I spun around with my eyes closed I got really dizzy so I didn’t try that again. Lol. So we all danced while Ashni told us to free our minds of anything else but the dance. It really felt good.

After some time that music also came to an end. Then we were instructed to sit or stand for the next 15 minutes. I chose to stand. I could feel the energy rushing through my body. So much of it was going to my feet. I’m sure because I was standing, but it was really amazing to feel. I stood there in Mountain Pose for 15 minutes. That’s the longest I have ever held that pose. I think now I’m starting to understand it’s power. Just to stand and really feel your feet beneath you is amazing. Now that I’m writing this I know I have to do that barefoot in the grass. I’ll be sure to report back about that.

Then the last 15 minutes we laid down on the floor. Usually when I’m in savasana I don’t fall asleep, but this time I was tired. I don’t know if it was the shaking, the dancing or just the heat of the day, but I was beat. I kept hearing myself breathing and it would wake me up. Soon Ashni was bringing us back and the class was over.

It was just amazing. I think something changed in me after that. I had been fighting headaches for a while and I haven’t had one since the New Moon. I know that was only about a week ago, but trust me that is big for me.

It was the perfect end to my New Moon day. I really felt like the New Moon was working on me that night and even now. I felt like old things were being left behind and the new was coming in. Thank Goddess. I really need a change.

If you are interested in Ashni’s class it’s Every Wednesday evening at 8pm at Move with Grace in Clinton Hills, BK. The class is by donation. Call ahead to make sure class is happening. I think it may not be happening this week (6/8), but it will return next week.

Stay tuned. I will soon return to the mat. 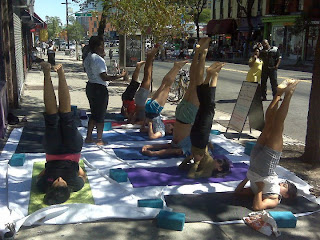 Posted by Shelley Nicole at 5:48 PM